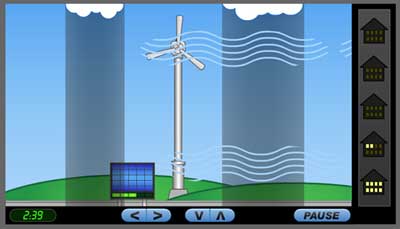 Capture clean energy from the wind and the Sun to produce enough electricity to run the town. Move your wind turbine up and down to keep it in the strongest, fastest winds. Keep your solar panels in the bright sunlight and out of the rain. See if you can light up the whole town. Win the clean energy Platinum Award!

Where does our electricity come from? 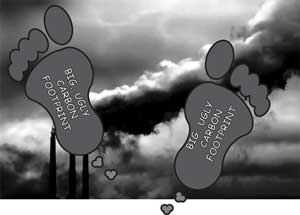 Most of the electricity that powers our homes in the U.S. is produced in power plants that burn coal or oil. These fuels are burned to heat water and produce steam. The steam turns a windmill-like machine called a turbine. The turbine is part of a machine called a generator, which converts the energy from the rotating turbine into electricity.

The trouble is, burning fuels like coal and oil produces carbon dioxide and other pollutants. Carbon dioxide is a powerful greenhouse gas that adds to global warming.

Earth gets enough energy from the Sun every hour to power every light, appliance, and TV on the planet for a whole year! If we could just capture a tiny part of that energy and convert it to electricity, we would never have to burn another lump of coal.

Also, there's energy to be captured from the wind.

We have the technology! We can make electricity from sunlight and wind without creating any carbon dioxide. We can make clean energy.

To make electricity from the wind, we use wind turbines. They work similarly to the turbines used in fossil-fuel-burning power plants, except these turbines are turned by the wind, not steam from water heated by burning stuff.

How much of the electricity coming to your house was made using clean energy sources like wind and solar power? Ask your parents or a teacher to help you find out.

Find out what some people are doing to capture more energy from the Sun. Read about the green career that can win you medals like the Bronze, Silver, Gold, and Platinum awards for playing "Power Up!"