What Is Climate Change?

The Short Answer:
Climate change describes a change in the average conditions — such as temperature and rainfall — in a region over a long period of time. NASA scientists have observed Earth’s surface is warming, and many of the warmest years on record have happened in the past 20 years.

Weather describes the conditions outside right now in a specific place. For example, if you see that it’s raining outside right now, that’s a way to describe today’s weather. Rain, snow, wind, hurricanes, tornadoes — these are all weather events.

Climate, on the other hand, is more than just one or two rainy days. Climate describes the weather conditions that are expected in a region at a particular time of year.

Is it usually rainy or usually dry? Is it typically hot or typically cold? A region’s climate is determined by observing its weather over a period of many years—generally 30 years or more.

So, for example, one or two weeks of rainy weather wouldn’t change the fact that Phoenix typically has a dry, desert climate. Even though it’s rainy right now, we still expect Phoenix to be dry because that's what is usually the case.

Want to know more about the difference between weather and climate? Take a look at this video!

What Is Climate Change?

Alaska's Muir glacier in August 1941 and August 2004. Significant changes occurred in the 63 years between these two photos. Credit: USGS

Climate change describes a change in the average conditions — such as temperature and rainfall — in a region over a long period of time. For example, 20,000 years ago, much of the United States was covered in glaciers. In the United States today, we have a warmer climate and fewer glaciers.

Global climate change refers to the average long-term changes over the entire Earth. These include warming temperatures and changes in precipitation, as well as the effects of Earth’s warming, such as:

Earth’s climate has constantly been changing — even long before humans came into the picture. However, scientists have observed unusual changes recently. For example, Earth’s average temperature has been increasing much more quickly than they would expect over the past 150 years.

Want to know more about how we know climate change is happening? Check it all out here!

How Much Is Earth’s Climate Changing Right Now? 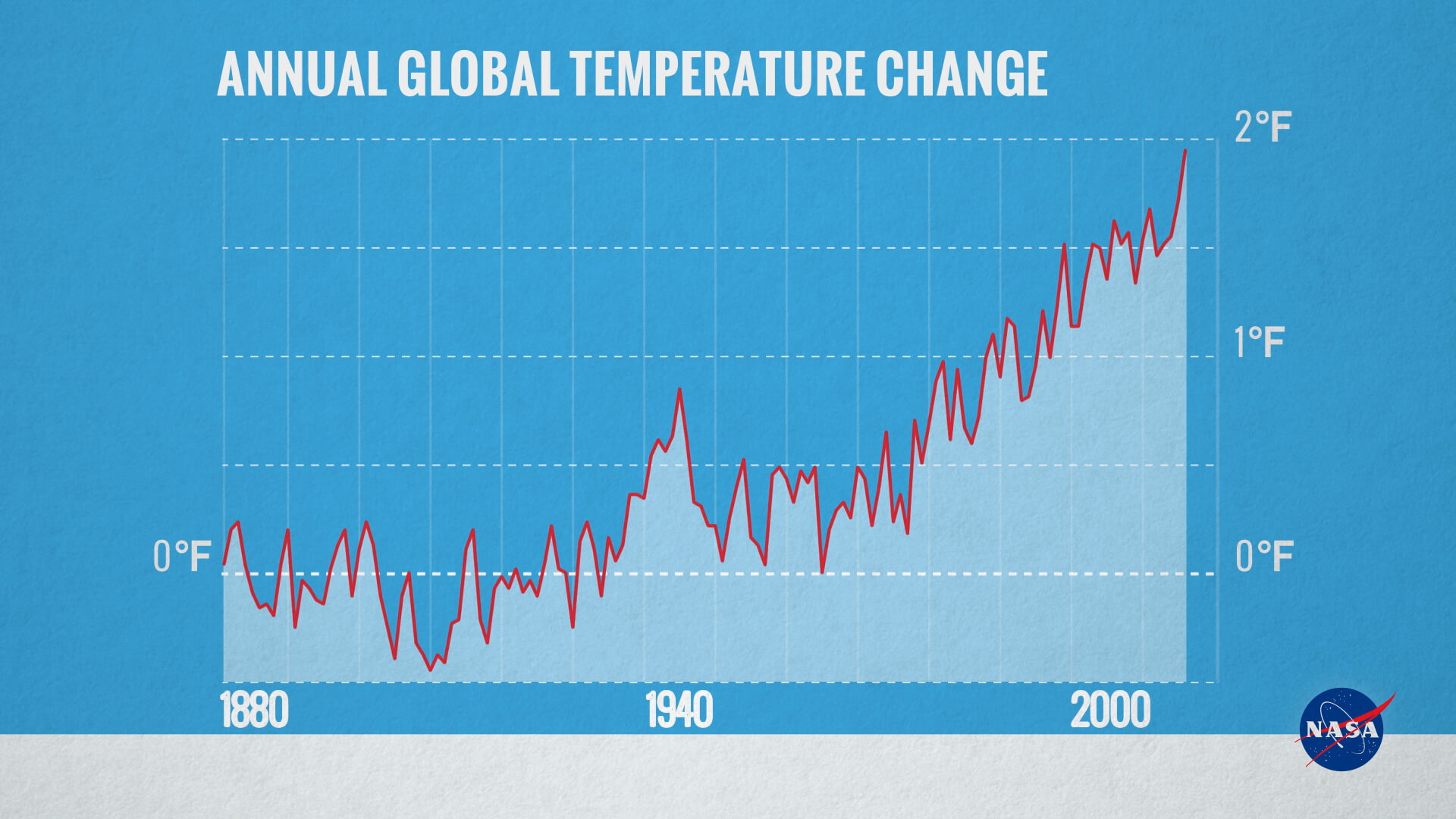 Some parts of Earth are warming faster than others. But on average, global air temperatures near Earth's surface have gone up about 2 degrees Fahrenheit in the past 100 years. In fact, the past five years have been the warmest five years in centuries.

Many people, including scientists, are concerned about this warming. As Earth’s climate continues to warm, the intensity and amount of rainfall during storms such as hurricanes is expected to increase. Droughts and heat waves are also expected to become more intense as the climate warms.

When the whole Earth’s temperature changes by one or two degrees, that change can have big impacts on the health of Earth's plants and animals, too.

A simplified animation of the greenhouse effect. Credit: NASA/JPL-Caltech

There are lots of factors that contribute to Earth’s climate. However, scientists agree that Earth has been getting warmer in the past 50 to 100 years due to human activities.

Certain gases in Earth’s atmosphere block heat from escaping. This is called the greenhouse effect. These gases keep Earth warm like the glass in a greenhouse keeps plants warm.

Human activities — such as burning fuel to power factories, cars and buses — are changing the natural greenhouse. These changes cause the atmosphere to trap more heat than it used to, leading to a warmer Earth.

Does What We Do Matter?

This video shows how Arctic sea ice has been changing since 1984. Credit: NASA

Yes. When human activities create greenhouse gases, Earth warms. This matters because oceans, land, air, plants, animals and energy from the Sun all have an effect on one another. The combined effects of all these things give us our global climate. In other words, Earth’s climate functions like one big, connected system.

Thinking about things as systems means looking for how every part relates to others. NASA’s Earth observing satellites collect information about how our planet’s atmosphere, water and land are changing.

By looking at this information, scientists can observe how Earth’s systems work together. This will help us understand how small changes in one place can contribute to bigger changes in Earth’s global climate.