How Do We Know the Climate Is Changing?

The Short Answer:
Scientists have been observing Earth for a long time. They use NASA satellites and other instruments to collect many types of information about Earth's land, atmosphere, ocean and ice. This information tells us that Earth's climate is getting warmer.

Why is Earth getting warmer?

We can't take Earth's temperature directly, but we do have a lot of information from weather stations, ocean buoys and remote sensing instruments. The information lets us see changes in climate. Credit: NASA/JPL-Caltech

Extra greenhouse gases in our atmosphere are the main reason that Earth is getting warmer. Greenhouse gases, such as carbon dioxide (CO2) and methane, trap the Sun's heat in Earth's atmosphere.

The burning of fossil fuels like coal and oil increase the amount of CO2 in our air. This happens because the burning process combines carbon with oxygen in the air to make CO2.

It's important that we monitor CO2 levels, because too much CO2 can cause too much warming on Earth. Several NASA missions have instruments that study CO2 in the atmosphere.

Why does it matter that Earth's Climate is changing?

Over millions of years, Earth's climate has warmed up and cooled down many times. However, today the planet is warming much faster than it has over human history.

Global air temperatures near Earth's surface have gone up about 2 degrees Fahrenheit in the last century. In fact, the past five years have been the warmest five years in centuries.

One-and-a-half degrees may not seem like much. However, this change can have big impacts on the health of Earth's plants and animals.

How do we know what Earth's climate was like long ago? 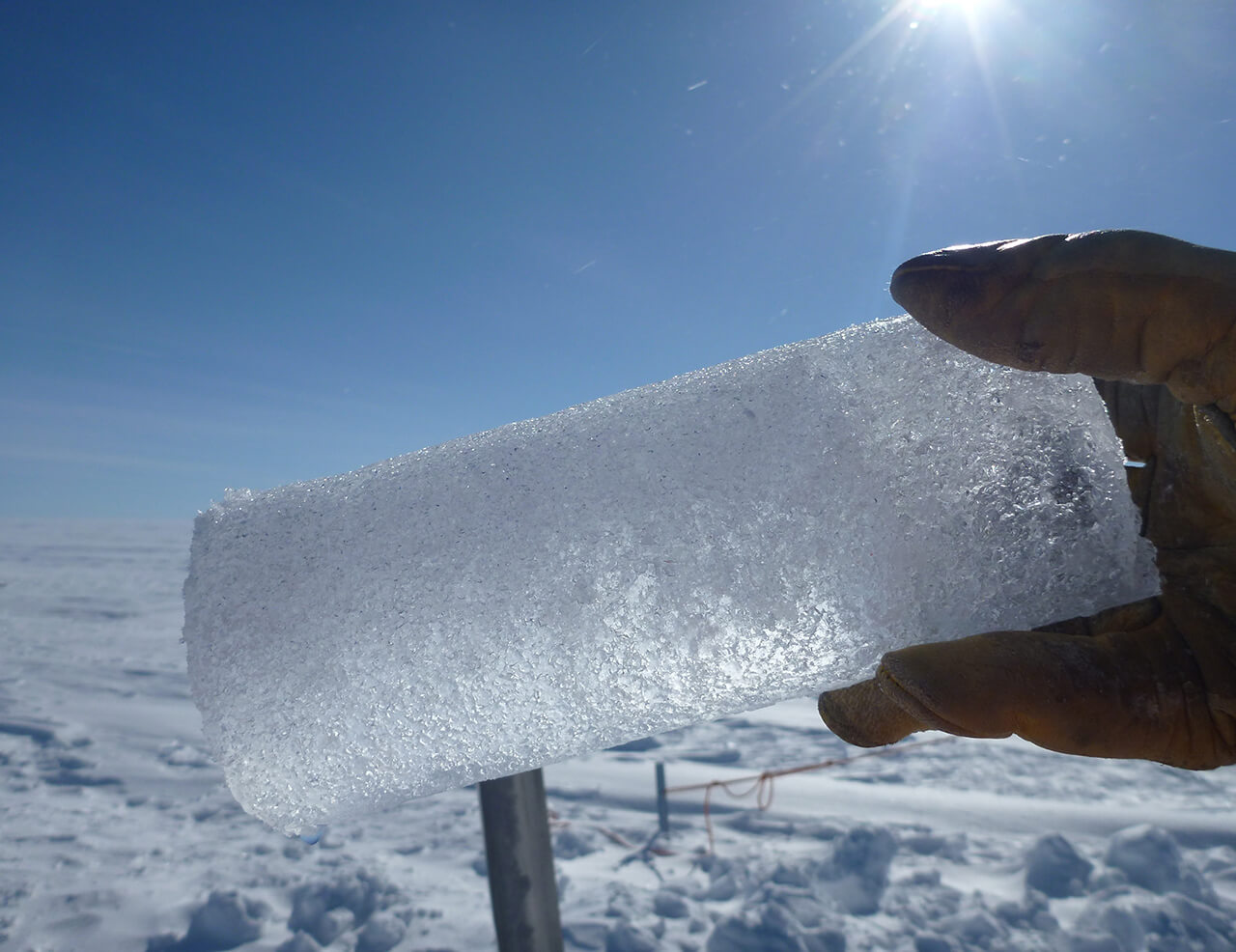 But if scientists want to know what Earth's climate was like hundreds of thousands to millions of years ago, they study sediment cores and ice cores. Sediment cores come from the bottoms of lakes or the ocean floor. Ice cores are drilled from deep — sometimes miles — below the surface of the ice in places like Antarctica.

A drilled ice core kind of looks like what you get if you plunge a drinking straw into a slushy drink and pull it out with your finger over the end of the straw.

The layers in an ice core are frozen solid. These layers of ice give clues about every year of Earth's history back to the time the deepest layer was formed. The ice contains bubbles of the air from each year. Scientists analyze the bubbles in each layer to see how much CO2 they contain.

Each layer in an ice core tells scientists something about Earth's past. Credit: NASA/JPL-Caltech

Scientists can also use ice cores to learn about the temperatures for each year. As snow accumulates onto a growing glacier, the temperature of the air imprints onto the water molecules in the ice.

Scientists who use trees, ice cores, and lake and ocean sediment to study Earth's climate are called paleoclimatologists. They look at all of these sources of information and compare their findings to see if they match up. If they do, then their findings are accepted as being most likely true. If the findings don't agree, the scientists do more studies and collect more information.

In the case of Earth's climate history, the results from many different kinds of studies agree.

How can so little warming cause so much melting?

It takes a lot of energy to warm up water. However, the oceans do absorb heat, and they do get warmer. This warmer water causes sea ice to begin to melt in the Arctic.

Information from NASA's Earth satellites shows us that every summer, some Arctic ice melts and shrinks, getting smallest by September. Then, when winter comes, the ice grows again. But since 1979, the September ice has been getting smaller and smaller and thinner and thinner. So, just a small amount of warming can have a huge effect over several years.

This animation shows satellite observations of Arctic sea ice each September from 1979 to 2018. Since 1979, the area of ice has been getting smaller and smaller. Credit: NASA Scientific Visualization Studio

Glaciers are another form of melting, shrinking ice. Glaciers are like frozen rivers. They flow over land like rivers, only they move much slower. Warmer temperatures cause them to flow more quickly. Many of them flow toward the ocean, breaking into huge chunks that fall into the water.

What does sea level tell us about climate change?

More glaciers are melting into the ocean, and the global sea level is rising. Sea level rise is another clue that tells us Earth's climate is getting warmer. But melting ice is not the only cause of rising sea levels. As the ocean gets warmer, the water actually expands! Scientists have observed that the sea level has risen 7 inches in the last 100 years.

To learn more about how we know Earth's climate is changing, visit the "Evidence" page on the NASA Climate website.