It’s hard to imagine life on Earth without oceans. The air you breathe used to be an ocean breeze. The water you drink was once in a cloud over the ocean.

The ocean is also important to the many species of plants and animals that call the water their home. This community of organisms is called an ecosystem.

Human-caused climate change is warming our planet, and the oceans are feeling the heat. Plants and animals in the ocean ecosystem are sensitive to changes in the ocean’s temperature. Some organisms can adapt to the change, but others can’t survive the warmer temperatures. Since so much life is dependent on these waters, it’s important to keep the oceans healthy!

With this activity, learn to make a cool and tasty version of the ocean ecosystem at home!


Note: This amount of time should allow the gelatin to become a thick liquid that is only slightly firm.

Learn more about some of the plants and animals of the ocean ecosystem!

There are more than 20,000 species of fish in the ocean. Some eat tiny organisms called plankton, some eat plants, and some eat other fish. Fish are an important food source for bigger animals, like whales, dolphins, and even humans.

On land, forests of trees provide shade, food, and housing for many animals. In the ocean, forests made from kelp (a type of seaweed) can do the same thing! While many fish eat the kelp, the seaweed forests also provide shelter and protection for many types of sea life.
Photo credit: Wikimedia Commons

When you first see coral, they often look like big rocky structures. But they are actually communities of living organisms! Corals are tiny animals that glue themselves to rocks on the ocean floor, called reefs. Coral reefs are important homes for fish and other ocean life, but they are also very sensitive to temperature changes in the ocean. 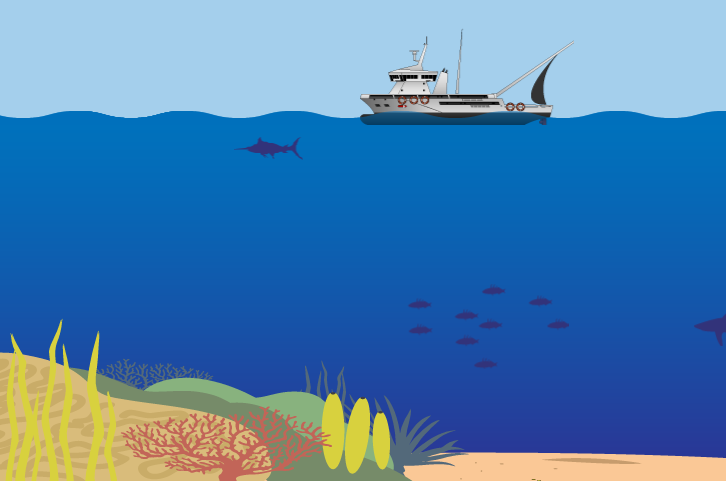