It's Cold! Is Global Warming Over?

Does a cold winter mean that global warming is over?

No. Scientists say that severe winter weather is still to be expected from time to time. That kind of weather happens even during a long-term warming trend for the planet.

The winter of 2010 was very cold in many parts of the U.S. And no doubt, more harsh winters are in the future.

That's weather for you. 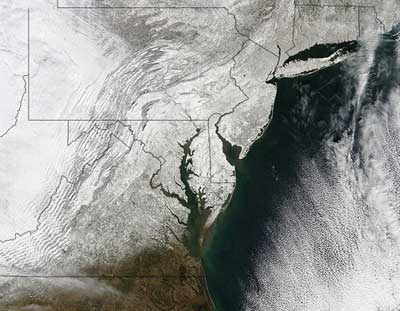 This satellite image of the U.S. mid-Atlantic coast shows an unusually heavy snowfall in the winter of 2010. The state lines have been drawn over the image. You are seeing Pennsylvania, Delaware, Maryland, Virginia, West Virginia, Connecticut and Rhode Island. Credit: NASA, MODIS Rapid Response Team.

So, what’s up with that? Is global warming slowing down? Or going backwards?

We wish that were true! But no. Many conditions affect weather. It so happens that during winter 2010, one of those conditions was a bit unusual.

The condition is the “Arctic Oscillation.” 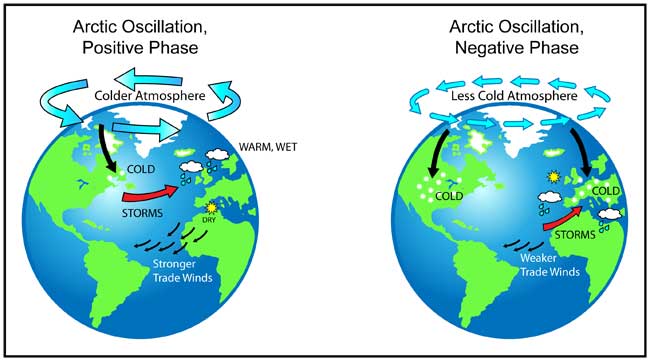 Air in the atmosphere moves from regions of higher pressure to regions of lower pressure. This air movement is called wind.

In 2010, the Arctic Oscillation was in an extreme negative phase. That means high-pressure air over the Arctic was pushing the cold, wet air south and giving most of the U.S., Europe, and Asia a really cold, wet, and snowy winter. Yes, the far away Arctic affects our local weather.

Scientists say severe winter weather like we had in 2010 is still to be expected from time to time. That kind of weather happens even while man-made greenhouse gases build up in the atmosphere creating a long-term warming trend for the planet. When we look into our future, we definitely see a warmer world.

But don’t lose the long underwear. Frigid weather will still sometimes test our toughness. The trip to a warmer world (climate change) will have plenty of extreme hot and cold weather. 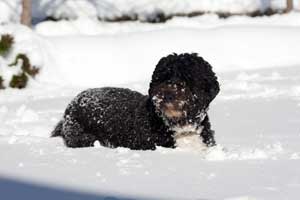