Almost all the energy to power our planet comes from the Sun. But instead of using the kind of solar energy stored up in coal and oil, why not grab it directly from the source?

This coal-fired power plant belches a lot of pollution and greenhouse gas into the atmosphere.

In the United States, most of the electricity we use is made by burning coal or oil. Unfortunately, burning coal and oil produces carbon dioxide, a greenhouse gas that adds to global warming.

Some electricity, though, is made using clean sources of energy like wind and sunlight. We need to be making a lot more electricity this way. 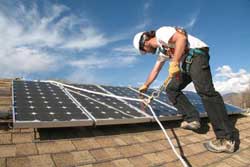 Many people are now putting solar electric systems on their houses. Solar panels covered with solar cells, sort of like little glass wafers, are installed on the roof. When sunlight strikes them, they turn some of it into electricity, which is fed through wires into the home’s electrical circuits. 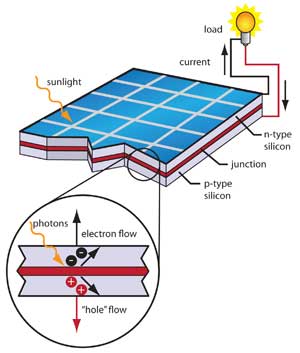 When sunlight hits the solar panel, the energy knocks loose some electrons from the atoms in the material. The electrons flow into the circuits of the house. 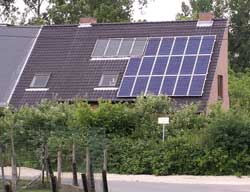 Solar panels over only part of the roof can supply most of the electricity to run a house. 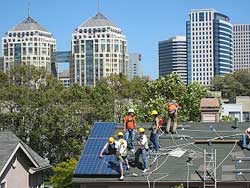 Solar panels covering even a small area on the roof can supply a good part of the electricity to run the refrigerator, lights, heating, TV, and other energy-hungry devices in the house. Making electricity from sunlight does not produce carbon dioxide and does not add to global warming. And after the solar panels are produced, paid for, and installed, the electricity is free!

In California, people are volunteering to help install solar panels on the homes of those who otherwise could not afford to buy them. The program is called Single-family Affordable Solar Homes, or SASH. The organization that sponsors the SASH program is called GRID Alternatives.

So far, they have installed 540 solar electric systems, which are reducing each family’s electrical bills by 75%. Over the next 30 years, these systems will prevent about 46,668 tons of greenhouse gases from being released into the atmosphere. 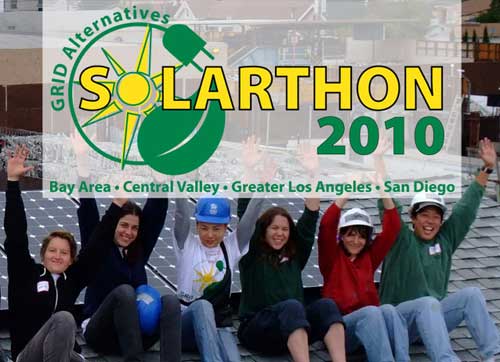 Solarthon 2010 volunteers have just helped more families lower their electricity bills and help the environment too.

From light to heat to electricity

After millions of years, they become coal and oil. But they still store most of that original energy from the Sun.

Another way people use solar energy is in thermal power plants. Sunlight reflects off the surface of large, curved mirrors, and is reflected toward a single focus at their center.

Or many mirrors can be arranged to reflect sunlight to a focus in the center. This energy is used to heat water and make steam, which then drives a turbine.

Then electricity is made the same way as if the water were heated by coal or oil—except with no greenhouse gases!