The hurricane season of 2009 (June 1 through November 30) was quieter than normal. Scientists think El Niño was responsible.

What is El Niño?

El Niño is a condition that sometimes occurs in the Pacific Ocean, but it is so big that it affects weather all over the world.

Weather depends a lot on ocean temperatures. Where the ocean is warm, more clouds form, and more rain falls in that part of the world. In the Pacific Ocean, near the equator, the Sun makes the water especially warm on the surface.

Normally, strong winds along the equator push the warm surface water near South America westward toward Indonesia. When this happens, the cooler water underneath rises up toward the surface of the ocean near South America.

However, sometimes these winds are weaker than usual. Sometimes they actually blow the other way (toward South America instead of Indonesia). In that case, the warm surface water along the equator piles up along the coast of South America.

Many fish that live in the normally cooler waters off the coast of South America move away or die. The fishermen call this condition of warm coastal waters and poor fishing "El Niño" meaning "the Christ Child," because in the occasional years it comes, it comes at Christmas time.

An El Niño in the Pacific Ocean affects weather patterns all over the world. One effect is that El Niño causes wind conditions in the upper atmosphere that slow down developing storms in the Atlantic Ocean.

Remember Hurricane Katrina in 2005? Scientists think that climate change may cause more of these huge storms. But, at least for one year, El Niño seems to have helped. 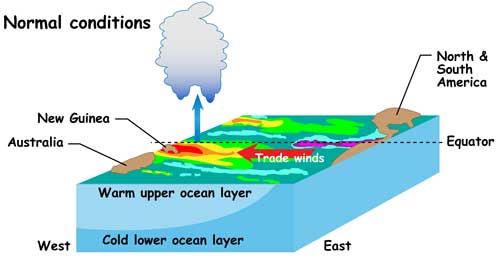 In most years, the trade winds blow across the Pacific from east to west.They push warm surface water toward Australia and Indonesia, allowing the colder, deeper water to rise up. The colder water carries more nutrients for fish than the warm water does. 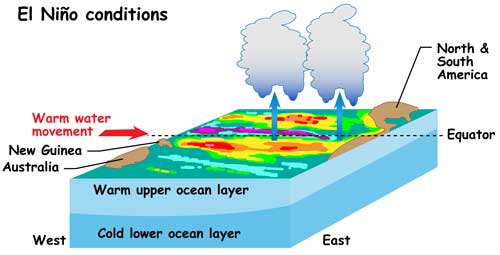 In El Niño conditions, the trade winds are weak or may even blow in the opposite direction from normal. Warm surface water piles up near the west coast of South America, and colder water remains deep in the ocean. So the fish stay in the deeper water where the food is. More clouds form over the warmer surface water, causing more rain in some areas, and drought in others. 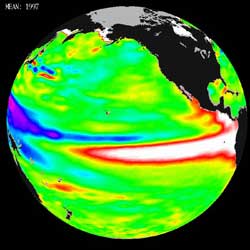 This image of Earth shows the strong El Niño of 1997. A spacecraft called TOPEX/Poseidon used radar to measure the height of the oceans' surface. On this map, purple, blue, and green are the colder parts of the ocean where the sea level is a little lower. Red, pink, and white are the warmer parts where the surface of the ocean bulges upward a bit.